Version 2.0 in the works 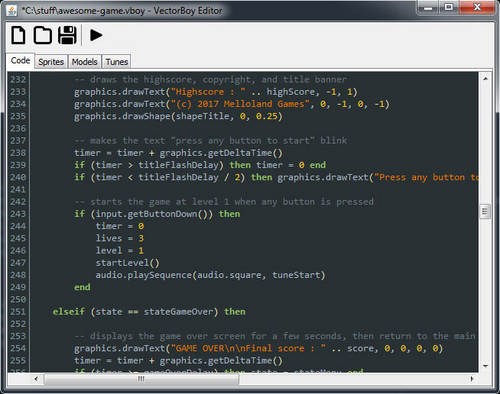 2017 has been a rough year. I was actually going to discontinue VectorBoy for good (thank my depression and anxiety disorder for that), but I can't bear to see this project go. I haven't done a huge lot of work on version 2.0 but it's coming along nonetheless.

Version 2.0 will feature a complete editor to simplify the users development process, import tools for vector graphics, rudimentary 3d support, better performances, bug fixes, and more. I'm building it in Java with libgdx and luaj this time, so while this means there are going to be some (few) compatibility issues with previous VectorBoy games, you'll be able to run the console on any Java-powered system. I also want to make an android version of the player (not the editor though).

What features would you like to see in future versions of VectorBoy? Let me know in the comments! :)